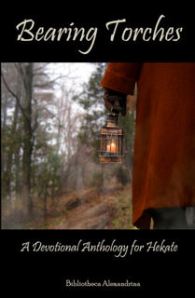 By Sannion and the Editorial Board of the Bibliotheca Alexandrina

Hekate is, without question, one of the most popular Goddesses in the world today, worshiped by Hellenic Recons, Wiccans, and Neo-pagans alike.

Hekate has many roles and many guises. To some she is a beautiful maiden, to others the dark mother. She has been called the guide of souls; the protector of the home; the giver of wealth; the mistress of powerful magic and frightful witches; the dweller on the threshold and the place where three roads meet.

These and other aspects of the Goddess are explored in the pages of this unique book, which honors Hekate’s diversity by collecting a wide array of offerings from her modern-day devotees, including poetry, essays, short stories and accounts of personal experiences.

Whether you’ve worshiped Hekate for ages or are just now discovering the power of this awesome Goddess, you will want to read Bearing Torches.

Bearing Torches is the fourth devotional anthology in Neos Alexandria’s Bibliotheca Alexandrina series, a collection of books dedicated to the Gods of Greece and Egypt.

It can be purchased in paperback format from Amazon here, and Amazon.co.uk here, and from Barnes and Noble. All of the proceeds from Bearing Torches – as well as many of the other volumes in the Bibliotheca Alexandrina series – will be used to help promote the revival of the worship of the Greek and Egyptian Gods, with a portion of the proceeds given to a worthy charitable organization in their name.  So, not only will you be getting a wonderful book about the modern worship of Hekate – but your money will be going to do good work and help the revival of ancient polytheistic religions.

ATTENTION Librarians, Teachers and Retailers: Bearing Torches is also available at reduced cost for academic institutions, lending libraries (public and private) and retailers. Check our online store, or email baeditor@gmail.com with any questions.

See the reviews on Goodreads, LibraryThing, and Amazon.

Introduction — 9
The Key Bearer by Michael Routery — 11
Finding My Way to Hekate by John Drury — 12
Hecate in My Life by Allyson Szabo — 15
She Meets Me at the Crossroads and Shows Me the Way by Krysta S. Roy — 18
A Triad for Hekate by Rebecca Buchanan — 20
Who is Hekate? by Amanda Sioux Blake — 21
Shaking the Bones by Melitta Benu — 25
To Hekate by Corbin — 27
Devotional Prayer to Hekate by Antonella Vigliarolo — 28
Hekate, the Dark Goddess by Diotima — 29
Ashes for Hekate by Amanda Sioux Blake — 34
Heliotrope Hedgerow by Christa A. Bergerson — 35
Queen of Darkness, Heaven and Earth by Frederick Villa — 36
To Hekate Trimorphis by Lykeia — 37
Calling Across the Nights Invocation by Pax / Geoffrey Stewart — 38
Daughter of the Night by Bettina Theissen — 39
Lady of Hounds by Amanda Sioux Blake — 40
Devoted to One of the Lady’s Hounds by Bronwen Forbes — 41
Lady of the Hounds by Diotima — 45
Hekate’s Bitch:  Hecuba and Other Greek Traditions of Cynanthropy by Phillip A. Bernhardt-House, Ph.D. — 46
Hekate Devotion by Marian Dalton — 56
Dark Moon Light by Christa Bergerson — 57
Prayer to Hecate by Holly Cross — 58
Invocation to Hekate by E. A. Kaufman — 59
Saffron Robed by Diotima — 60
Dancing Hands by Holly Cross — 61
Hekate’s Offering by E. A. Kaufman — 62
Windsong by Bettina Theissen — 63
Serving Her by Allyson Szabo — 64
On the Modern Worship and Understanding of Hekate by Lykeia — 66
Hekate by Hearthstone — 69
Oblation by Holly Cross — 70
My Journey With Hekate by Krysta S. Roy — 71
Apology to Hekate by Jennifer Lawrence — 74
On the Edge by Jeremy J. Baer — 76
Finding Hecate Where Three Roads Meet by Pax / Geoffrey Stewart — 78
Hekate Soteira by P. Sufenas Virius Lupus — 81
Hekate, Briefly in a Dream… by Renee Rhodes — 82
Long Beach, Hekate by Todd Jackson — 83
Hekate at Lagina and Çatalhöyük by Tim Ward — 84
The Dark Mother by Dee Estera Fisher — 97
Fourth of July Torchbearer by K.S. Roy —
Night-Time Prayer to Hekate Antaia  by Antonella Vigliarolo — 98
Hekate Found by Scott B. Wilson — 99
My First Time by Holly Cross — 104
Hekate’s Devotion by Shay Morgan — 105
Hekate’s Deipna and Other Devotional Acts by Venus Clark — 106
To Hecate by Hearthstone — 109
A Prayer to Hekate by Kenn Payne — 110
To Hekate by Emily Carding — 111
Celebrating the Deipnon by Cara Schulz — 113
Charge of the Dark Queen by Frater Eleuthereus — 120
Aoros by Rebecca Buchanan — 122
Contradiction in Terms by Allyson Szabo — 133
Hecate by Vicki Scotti — 134
Daily Prayer for Guidance by Krysta S. Roy — 135
Seasons of the Witch: Hecate and the Wheel of the Year by Leni Hester — 136
Pale Hekate by Jacinta Cross — 139
Flower of Fire: Hekate in the Chaldean Oracles by Edward P. Butler — 140
Prayer to Hekate by Rebecca Buchanan — 158
Trivia by Sannion — 159
Crossroads by Melia Suez — 166
Hecate’s Rising by Brian Seachrist & Lori Newlove — 167
Gatekeepers, Way-Clearers, Mediators: Wepwawet (or Anubis and Hermanubis), Hekate, and Ianus in the Practices of the Ekklesía Antínoou by P. Sufenas Virius Lupus — 169
Serpent Hair by Rebecca Buchanan — 179
Hermes and Hekate by Sophie S. — 180
Song for Hecate by Rhiannon Asher — 182
Maternal Hecate by Allyson Szabo — 183
Hymn to Hekate by Lykeia — 184
A Prayer to Hekate by Hearthstone — 185
Daughter of Night by Todd Jackson — 186
Some Epithets and Unfamiliar Terms Explained — 191
Select Bibliography — 192
Some Online Resources — 193
About the Bibliotheca Alexandrina — 194

1 Response to Bearing Torches: A Devotional Anthology for Hekate