Written in Wine: A Devotional Anthology for Dionysos 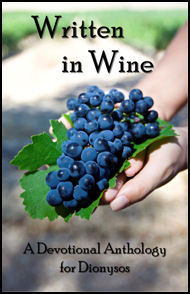 Edited by Sannion and the Editorial Board of the Bibliotheca Alexandrina

Written in Wine is the first volume in Neos Alexandria’s Bibliotheca Alexandrina, a collection of collaborative anthologies dedicated to the Gods of Greece and Egypt.

Written in Wine honors Dionysos, the God of wine, vegetation, religious ecstasy, personal liberation, and the mysteries of life. With almost sixty pieces by over thirty contributors from every segment of the Hellenic polytheist community (as well as individuals who do not identify as such) it is truly exhaustive in its portrayal of the different ways that people understand and relate to this complex and powerful deity today. Within these pages you will find original artwork, poetry, essays, fiction, scholarly translations, personal accounts of experiences with the God, and even a couple plays! In their very different ways each of our authors show that Dionysos is alive and still deeply touching our lives today.

Written in Wine can be purchased at Amazon here, or at Amazon.co.uk here, and through Barnes and Noble.

All of the proceeds from Written in Wine – as well as the other volumes in the Bibliotheca Alexandrina series – will be used to help promote the revival of the worship of the Greek and Egyptian Gods, with a portion of the proceeds given to a worthy charitable organization in their name. So, not only will you be getting a wonderful book about the modern worship of Dionysos – but your money will be going to do good work and help the revival of ancient polytheistic religions.

ATTENTION BOOKSELLERS: If you would like to carry Written in Wine in your store please contact us. We are willing to sell you copies of the book at a significant discount in order to make it easier to distribute Written in Wine as widely as possible. Please direct any inquiries to baeditor@gmail.com for more details.

Some of the fine establishments where Written in Wine can currently be found include:

A Note on Style — 7
Introduction by Sannion — 9
The Satyr of New Orleans by Sannion — 12
Dionysos the Revealer by Samantha Frye — 15
Lenaia by Sarah Kate Istra Winter — 17
Love for Dionysos by Suz Thackston — 18
Catch Me If You Can by Hector Lugo — 20
Hail the Twice Born by Diotima Sophia — 21
The Paths to Dionysos by Sannion — 22
Orphic Hymn 30 Translation by Adam P. Forrest — 33
For Dionysus by Raphaeline Williams — 34
Freedom From Ourselves: Dionysos’ Greatest Gift by Syna — 35
Dancing with Dionysos by Samantha Frye –37
What It Means To Be a Maenad by Sarah Kate Istra Winter — 38
Dionysos Rising by Charles M. Peckman Jr. — 40
Dionysus Knows His Lady by Allyson Szabo — 41
Dion and I: The Dance So Far by S. A. Victory — 43
Six Poems by Cara Schulz — 48
Dionysos From an Apollonian Perspective by Samantha Frye — 49
An Echo, a Plea by Larissa Bernardes — 51
How to Worship Like a Greek by Nuri — 53
What It’s Like Right Now by Lysiodoros (Adam P. Forrest) — 54
Shamanism in Nonnus’ Dionysiaca by Ron Newbold — 56
For Dionysos by Renee Rhodes — 63
Labyrinth of Mirrors by Michael Routery — 64
Dionysos on Skyros by Tim Ward — 66
To Dionysos the Bull by Samantha Frye — 82
Libation by Diotima Sophia — 83
Song for Dionysos-Zagreus by Blue Starthief — 84
Loam by Venecia Rauls — 87
Dionysos & Oracular Madness by M. Isidora Forrest & Adam P. Forrest — 88
Ecstasy by Moonlight by Sannion — 97
Dionysus, Plead by Larissa Bernardes — 98
Dancing and Dreaming with Dionysos: A Personal Devotional Journey by the Rev. Dr. Phillip A. Bernhardt-House — 99
Labyrinth by Venecia Rauls — 108
The Fool by Amanda S. Blake — 109
Black Leopard by Rebecca Buchanan — 111
Eyes Like the Fruit of the Vine by Hector Lugo — 124
Diamente for Dionysos by Laura LaVoie — 126
Dionysus by Amanda S. Blake — 127
Dionysus Sees Her by Allyson Szabo — 134
The City Dionysia: a Trilogy in Four Parts by Evanne Floyd — 136
To Dionysos by Hearthstone — 155
To Dionysos II by Hearthstone — 156
The Mystery of Meilikhios and Bakkhios by Sannion — 157
Dionysos of the Vine by Samantha Frye — 160
Dionysus by Diotima Sophia — 162
Culture from Counter-Culture: Dionysian Drama and Hellenism by Jeremy J. Baer — 163
Homeric Hymn #7 Translated by Karen McCollam — 173
Dionysus by Rebecca Buchanan — 177
Ariadne by Samantha Frye — 178
Dionysos and Dionysias by Ivan Richmond — 180
Arakhneiad by Sannion — 181
Orphic Hymn 52 Translation by Adam P. Forrest — 184
Lesser-Known Dionysian Festivals by John H. Wells — 185
Lampteria by Sarah Kate Istra Winter — 194
To Bright-Eyed Dionysos by Samantha Frye — 195
Dionysos: Intuition and Paradox by Venecia Rauls — 197
Future Perfect by Nuri — 200
Come Dionysus by Theokleia –201
After the Revel by Sannion — 202
Glossary of Important Terms — 205

About the Bibliotheca Alexandrina — 220

2 Responses to Written in Wine: A Devotional Anthology for Dionysos