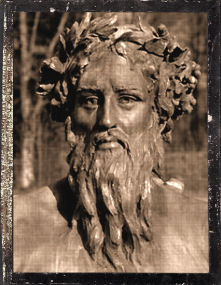 Blessing: Poseidon is one of the oldest and strongest of the Gods, whose kingdom is the sea. Sailors, fisherfolk, and all who work on or around the sea are his. He values strength and courage, but is not above taking even the most beloved sailor down to the briny depths. He is a chaotic God, completely unpredictable. He is also connected to horses, which form he frequently takes to mate with mortals and Goddesses alike.

Ways to honor: Visit a beach. Ride horses. Go out on boats. Support fishermen and sailors. Fight pollution of our seas and beaches. Work to preserve the seas and the species that inhabit those waters. Study oceanography. Learn a water sport, such as diving or snorkling or boating.

Excerpt from Geographica by Strabo

Excerpt from On Animals by Aelian

Excerpts from The Odyssey by Homer

Hymn of Arion from On Animals by Aelian

A Reminder of Offering to the Sea by Michael Lux

To Poseidon by Amanda Aremisia Forrester

Poseidon and Antinous on Aedicula Antinoi

Poseidon Beyond the Sea Part One on lemon_cupcake

Poseidon Beyond the Sea Part Two on lemon_cupcake

Ancient texts and images of Poseidon

Who’s Who article on Poseidon