With Lyre and Bow: A Devotional in Honor of Apollo 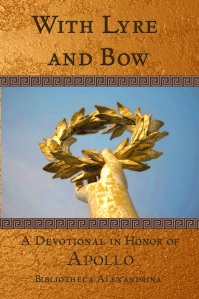 Bringer of Health and Plague. Master of Song and Poetry. Lord of Truth and Enlightenment.

Olympian God of prophecy and healing, archery and light and music, Apollo was honored throughout the ancient Mediterranean and across the Roman Empire. A paradoxical God, he is associated with both wisdom and virility, with compassion and cruelty, with fatherhood and youth. Twin to the virginal Artemis, he took many mortal lovers, male and female, and sired numerous children — at least one of whom, the healer Asklepios, ascended to godhood himself.

Despite the deliberate destruction of His temples, Apollo was never forgotten. Renaissance artists and philosophers found in Him a worthy and willing patron, and in the centuries since his devotees have only grown in number. Among them are the contributors to this anthology, whose poems, essays, artwork, rites, and short fiction celebrate the God in all his wondrous complexity.

And so we sing, as they did in ancient days: hail to you, Son of Thunder and Lightning.

With Lyre and Bow can be purchased in paperback format through Amazon, and through Barnes and Noble. All of the proceeds from With Lyre and Bow – as well as many of the other volumes in the Bibliotheca Alexandrina series – will be used to help promote the revival of the worship of the Greek and Egyptian Gods, with a portion of the proceeds given to a worthy charitable organization in their name.  So, not only will you be getting a wonderful book about the modern worship of the Archer – but your money will be going to do good work and help the revival of ancient polytheistic religions.

ATTENTION Librarians, Teachers and Retailers: With Lyre and Bow is also available at reduced cost for academic institutions, lending libraries (public and private) and retailers. Check our online store, or email baeditor@gmail.com with any questions.

An Ever-Burning Lamp by Hillary Lyon … 17

Another Day at the Office for Apollo by Jon Wesick … 18

Apollo Among the Hyperboreans by T.J. O’Hare … 22

Apollo of Perdition by Ellen Denton … 25

Apollo on the Sibyl by John J. Brugaletta … 26

Hymn to Apollo by Callum Hurley … 35

Hymn to Apollo by Jennifer Lawrence … 36

Light of My Heart by Jessica Orlando … 44

My Golden God by Jessica Orlando … 51

“On Delos was bright Apollo born” by Terence Kuch … 54

A Sonnet for Apollo by Michael Routery … 65

Sonnet to Apollo by Audrey Greathouse … 66

To Apollo by Callum Hurley … 69

We Address by Hillary Lyon … 74

The Sun and Ocarina by Callum Hurley … 75

As Bright as the Sun: Comparing Apollo and Freyr by Hélio Pires … 92

Celestial Light: The Iconography of Apollon and Heru-Wer by Samantha Lykeia Sanders …. 106

The Light of Apollon by Amanda Artemisia Forrester … 113

Phoebus Apollo and the Hours by Georg Friedrich Kersting … 147

The Blue Bird and the Raven by Rebecca Buchanan … 148

The Oracle of Delphi by Joe Giordano … 192

Apollo and the Nine Muses by Gustave Moreau … 203

Offering to Apollo by Callum Hurley … 209