The Mousai (The Muses) 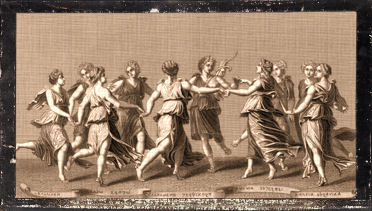 Blessing: The Muses preside over the arts and sciences, giving inspiration to all artists, particularly poets, painters, dancers, musicians, philosophers, and astronomers.

Names and Symbols: The Delphic Muses were the daughters of Apollon. Traditionally three in number, they are named Kephiso, Apollonis and Borythenis; or, alternatively, Nete, Mese and Hypate. They represent (or were represented by) the three strings of the lyre.

The Titanic Muses are three or four in number. They are Melete (practice), Aiode (song), and Mneme (memory). The last of these is usually equated with Mnemosyne, the mother of the nine Olympian Muses.

Festival of the Muses (9 Artemisios)

Ways to honor: Create! Learn a new art form. Go to museums, theaters, dance recitals, and other places of culture. Support artists. Give money to street musicians or painters. Turn a child onto art.

Excerpt from Geographica by Strabo

Excerpt from On Architecture by Vetruvius

Excerpt from The Theogony by Hesiod

Orphic Hymn LXXVI (To the Muses)

Solon’s Hymn to the Muses

Hymn to Clio by Lykeia

Hymn to the Muses I by Rebecca Buchanan

I Sing the Muses Nine by Amanda Aremisia Forrester

The Artist’s Prayer (To Apollon and the Muses) by Lykeia

To My Muse by Amanda Aremisia Forrester

Ritual for the Muses by Rebecca Buchanan

Wikipedia article on the Muses

The Muses in Myth and Art

The Muses in Homer