Beyond the Pillars: An Anthology of Pagan Fantasy 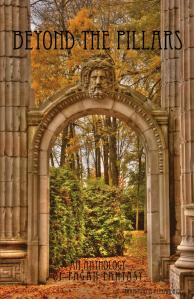 Fantasy literature is a sprawling tapestry of possibility. From cities built in the skies to an entire world locked inside a dusty old wardrobe, the opportunities are as boundless as the imagination.

But what of Pagan-themed fantasy? Tamora Pierce, Holly Black, and J.K. Rowling draw inspiration from Pagan myths and monsters when constructing their worlds. Urban fantasy writers often reinvent myths or legends to suit their stories.

Still the quest remains for fantasy stories and poems written for and by followers of the Pagan Gods. This anthology is a collection of tales brought together from writers the world over for exactly that purpose. In its pages, you will meet werewolf devotees of the Moon Goddess, intern for Cernunnos, discover how Loki and Sigyn fell in love, decipher the language of the trees, and spend Sir Francis Drake’s final hours in the company of a cunning lwa, among many other adventures. In the true spirit of fantasy, these writers have followed their imaginations and dared to wonder, “What if?”

And now, they extend that invitation to you. Will you answer the call and dare to venture beyond the pillars?

Beyond the Pillars is the latest in Bibliotheca Alexandrina‘s line of genre fiction anthologies. It can be purchased for the Kindle, and in paperback through Amazon, and through Barnes and Noble.

All of the proceeds from Beyond the Pillars – as well as many of the other volumes in the Bibliotheca Alexandrina series – will be used to help promote the revival of the worship of the ancient Gods, with a portion of the proceeds given to worthy charitable organizations in their name.  So, not only will you be getting an imaginative collection of tales – but your money will be going to do good work and help the revival of ancient polytheistic religions.

ATTENTION Librarians, Teachers and Retailers: the print version of Beyond the Pillars will also available at reduced cost for academic institutions, lending libraries (public and private) and retailers. Check our online store, or email baeditor@gmail.com with any questions.

The Guardians by Marcus Buffrey — v
Introduction by Ashley Horn — xi
Isidore Clements’ Never-Ending Story by Brenda Moguez — 1
The Cauldron of Annwyn by TC Phillips — 28
The Land of After and Before by Thomas J. Keller — 38
The Mathematical Formulae of the Wise Men of the City of Qlam by S.R. Hardy — 51
The Nursery Rhyme by Melia Suez — 58
She Who is Milk White by CK Wagner — 62
Raw Meat For The Great God Pan by Mark Mellon — 66
Artemis by John J. Brugaletta — 75
A Gathering of Wolves by Diana Hurlburt — 77
Diana Remembers Actaeon by Brittany Warman — 88
White Hood, Red Blood by Jason Andrew — 89
Building a Rainbow by Carrie McKay — 97
Something there is that doesn’t love a wall by C. G. Reid — 98
in a cavern on the moon, two ravens touch noses at last by Steve Ramirez — 119
Another Fine Mess by Michelle Herndon — 120
loki’s advice for my first job interview by Steve Ramirez — 127
A Wind-Swept Tree by Jolene Dawe — 128
Cave Canem by Edward Ahern — 157
Upon Her Husband’s Return, Penelope Asks His Opinion by Steve Ramirez — 168
The Return of Orestes by John Mueter — 169
An Imaginary Story About a Guy on the Bus by Marie Lecrivain — 178
The Girl Whose Name Means Girl by Genevieve Williams — 179
Non-Caffeinated Dreams in Los Angeles, City of the Pyramids by Marie Lecrivain — 188
Asthawish by Kayleen Eggert — 192
Gorse-Girl and Nettle-Boy by T. J. O’Hare — 202
Peeling the Grief Until the Onion is None by L.C. Atencio — 212
The Serpent in the Throat by Rebecca Buchanan — 214
Hieros #14 by Marie Lecrivain — 231
Al-Afa’a, or the Serpent-Child by Darius Matthias Klein — 232
Tiamat’s Birthday with Her Unborn Twins by Carrie McKay — 247
Rain Child by Rose Hill — 248
Nana by Szmeralda Shanel — 252
The Boatman’s Polaroids by Steve Ramirez — 263
The Drum of the Sea by Gerri Leen — 264
The Apple by Kit Koinis — 276
Lilith Offering Adam a Long-Awaited Explanation by Ruth Sabath Rosenthal — 281
The End and the Beginning by Tina Georgitsis — 283
Our Contributors — 290
About Bibliotheca Alexandrina — 300
Current Titles — 301
Forthcoming Titles — 302

5 Responses to Beyond the Pillars: An Anthology of Pagan Fantasy